Avellino, Kindergarten, and Wait… What?!

Dino and Grazia graciously drove me from Castel San Giorgio to Avellino to deliver me to my new host. During the 40 minute trip they made me promise repeatedly that if I needed anything, I would call them immediately. I honestly felt a little like a kid being dropped off at college by his parents, except that I was going to Kindergarten.

After exchanging a few words with my new host, Dino and Grazia seemed satisfied and bid me one last farewell. I was now in the hands of my third host, Katia. I was here to help her at her Kindergarten. Katia was a single mother of two young children, Jake who was 9 and Rachel who was 13. Her mother, Uma, was from Germany. Katia and her mother ran a local Kindergarten with the help of her cousin, Erica, and a small handful of teachers. This was where I would be helping out. Or so I thought.

As it turns out, Katia had more in mind. She had a large garden area that had fallen into quite a state of disarray. She was hoping that in addition to helping out at the Kindergarten, I could clean up and bring back to life her large garden area as well. While I didn’t quite think that was very doable in the amount of time I’d be staying with her, I was resolved to get as much done as I could.

Katia showed me to the old-classroom-turned-bedroom where I would be staying (she used to teach the Kindergarten in this separate section of her home). I immediately missed the comfort of my past two hosts. The room was quite messy, dusty, and grungy. She promised me she’d give it a good once over while I explored the area, and when I returned, it was slightly less messy, dusty, and grungy. the bedding felt and smelled as though it hadn’t been washed in quite some time. I began to have a bad feeling about staying here, but I simply wrote it off as me having previously been spoiled in terms of accomodations.

Once I was more or less settled into my new home-for-the-next-two-weeks, Katia brought me along with her and her kids to visit a friends house for a little get together. Her friends, whose names I don’t remember, lived on a beautiful farm, made their own wine, and cooked good food. I helped finish up this batch of wine, and shared in the spoils. 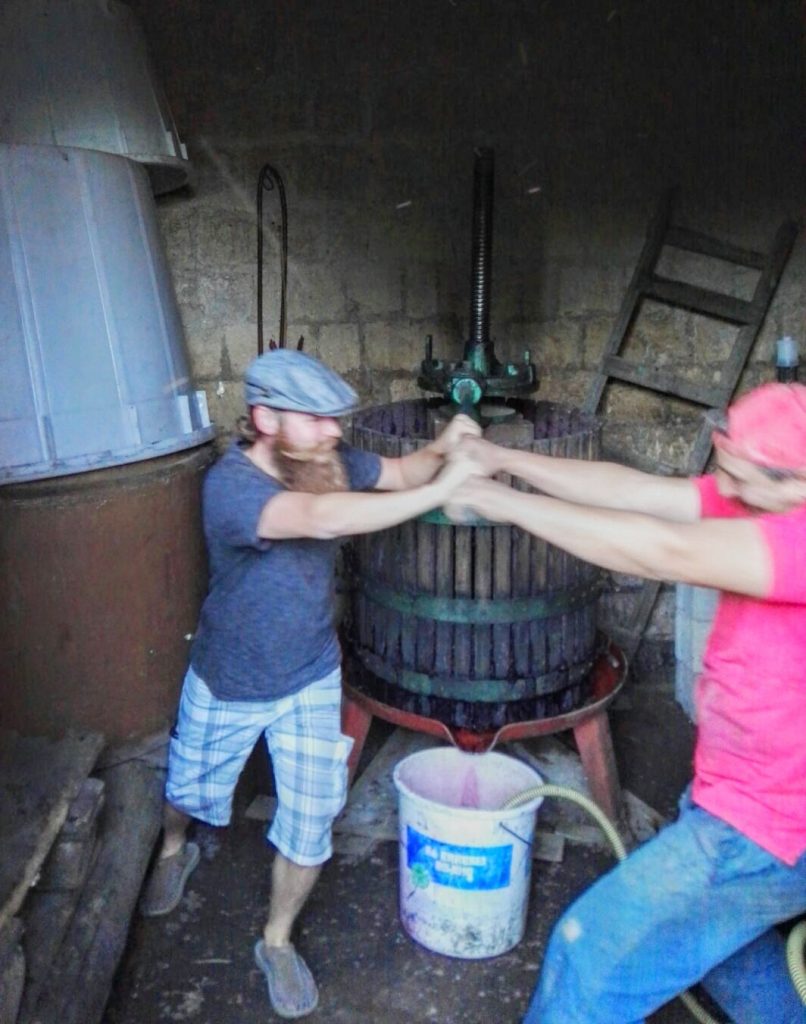 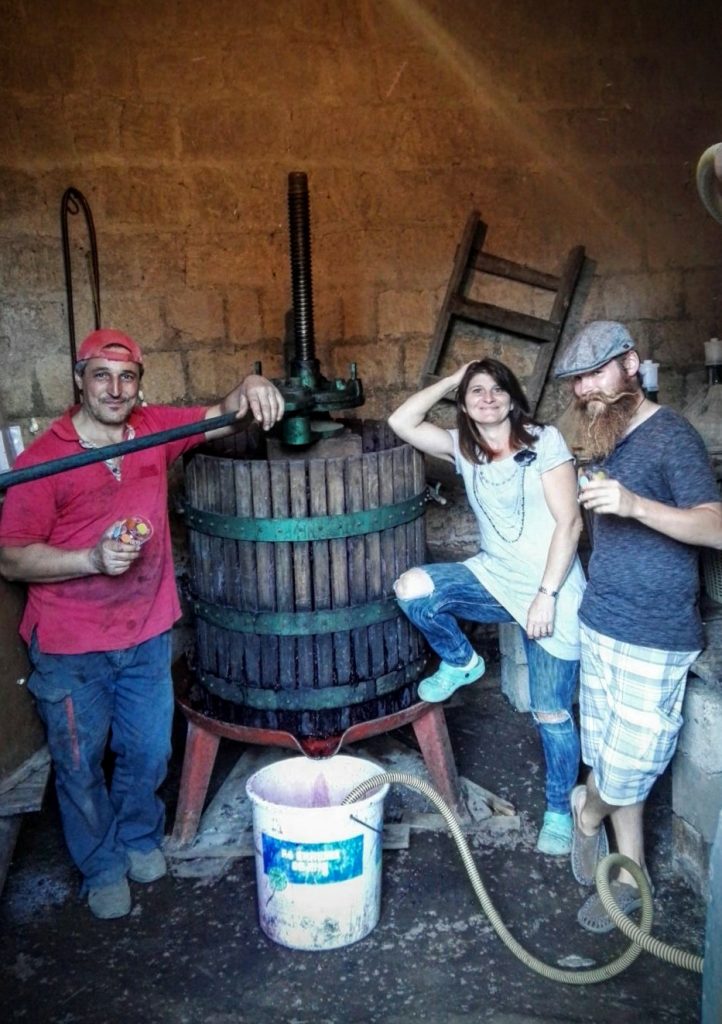 Sharing in the spoils! 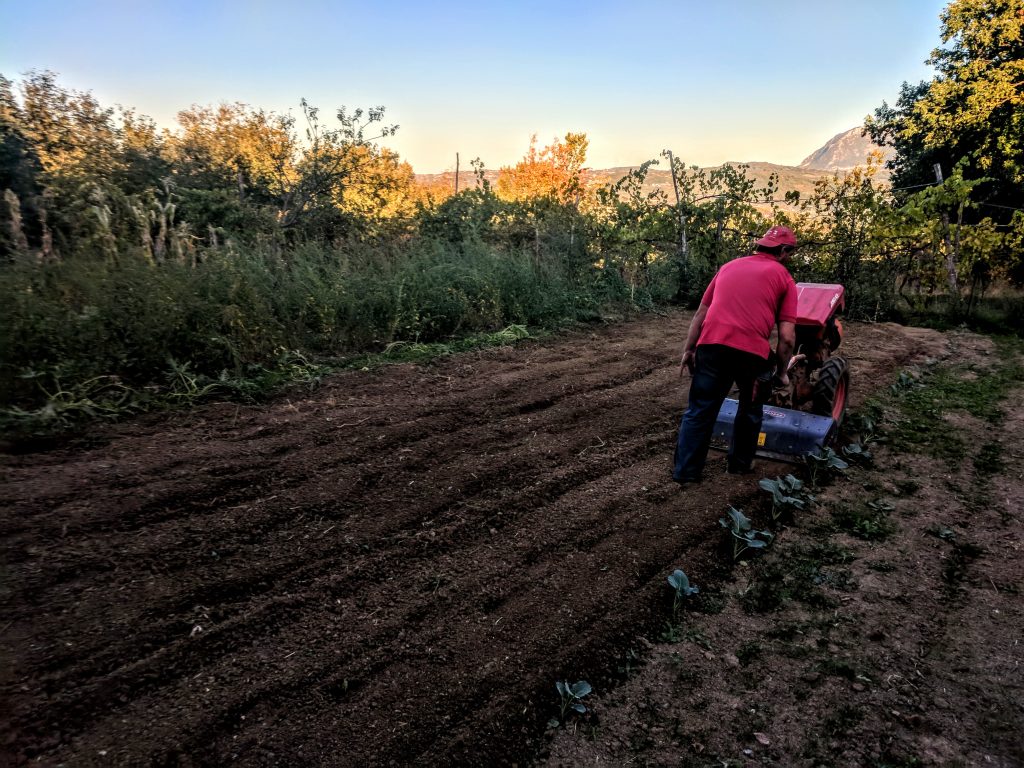 The next day began my first official day as Katia’s volunteer. I awoke ready to make a good impression, and accomplish as much as I can only to find that being nestled in between majestic mountains had its drawbacks. It was freezing cold. I couldn’t believe how cold it was in the morning. I dragged myself out of bed, bright and early looking forward to nothing more than to start the day with nice hot shower. This is where things started to go bad for me.

There was no shower. I was told if I wanted to wash myself, I could either wake up around 5:00am and walk to the kindergarten to take a shower there before anyone else showed up, or I could take a poor man’s bath my bathroom sink. It already being near 7:00am, the poor man’s bath was my only option. Little did I know, and all too soon did I discover, there was also no hot water. So every cold morning began with freezing poor man’s bath, or an early morning stroll to shower in the Kindergarten.

It seemed that I would be starting each day in the garden, clearing as much as I could until lunch time. Then I would walk to the school and partake in what was left of their lunch. Then I would help out around the Kindergarten for the remainder of the day, eat supper there, and then return home. Altogether it was a lot. A lot of work, and a lot of time.

I’m going to cut to the chase. Things weren’t going well for me here on many fronts. The usual agreement is that I will volunteer for my host 4-5 hours a day, 5 days a week in exchange for lodging and food. Here, I was working 5 hours before lunch, and then I was expected to go to the Kindergarten and work more. If I wanted dinner, I had to stay even longer. No matter how much work or time I put in, my host never seemed satisfied or particularly grateful for my time and effort. Despite claiming that I would have access to Wifi at the home, There was only access at the school. The shower situation was aggravating to say the least. I was at my wits end. Needless to say, when my host asked me to find a new place to stay, I was relieved.

Yes, 5 or 6 days into my 2 week stay, she pulled me aside after dinner and asked me to leave. But I’ll get to that shortly.

Before I get carried away with everything that went wrong, I want to express that my experiences in Avellino were not all bad. There were great moments, and memories that I happily carry with me everywhere I go. I enjoyed spending time with katia’s children. They were so curious and kind. They treated me like an older brother. I loved that every morning Uma left a cup of coffee on the windowsill for me. I’ll never forget the way her face lit up when she heard me singing German children’s songs, or the enthusiasm with which she joined in. I loved interacting with the children at the Kindergarten. I amused and bemused them to no end while I taught English and Music. I did an expert job distracting them when someone else was trying to teach them. They honestly couldn’t care less about what I was trying to teach them. They just wanted to know more about this funny looking foreigner. 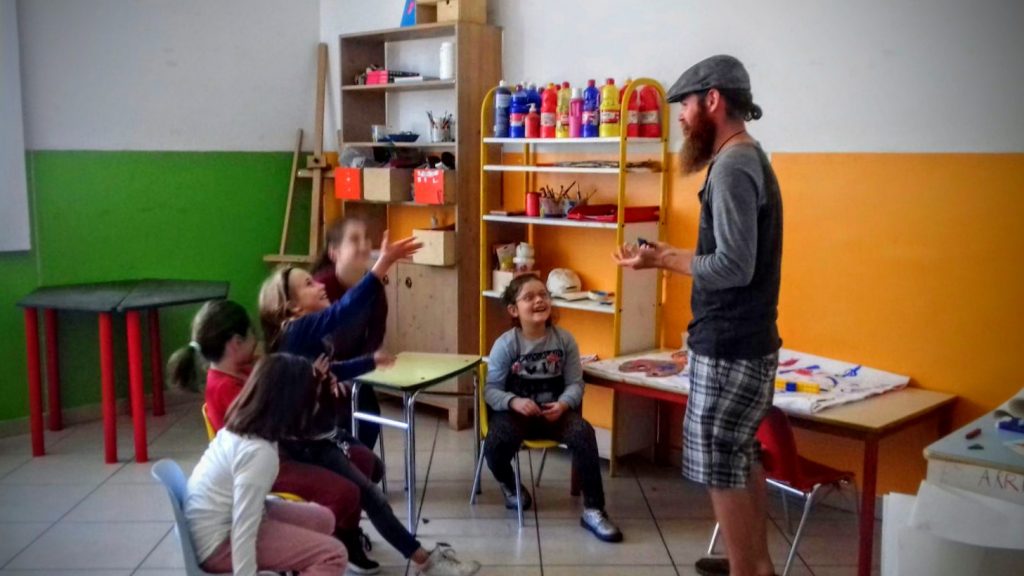 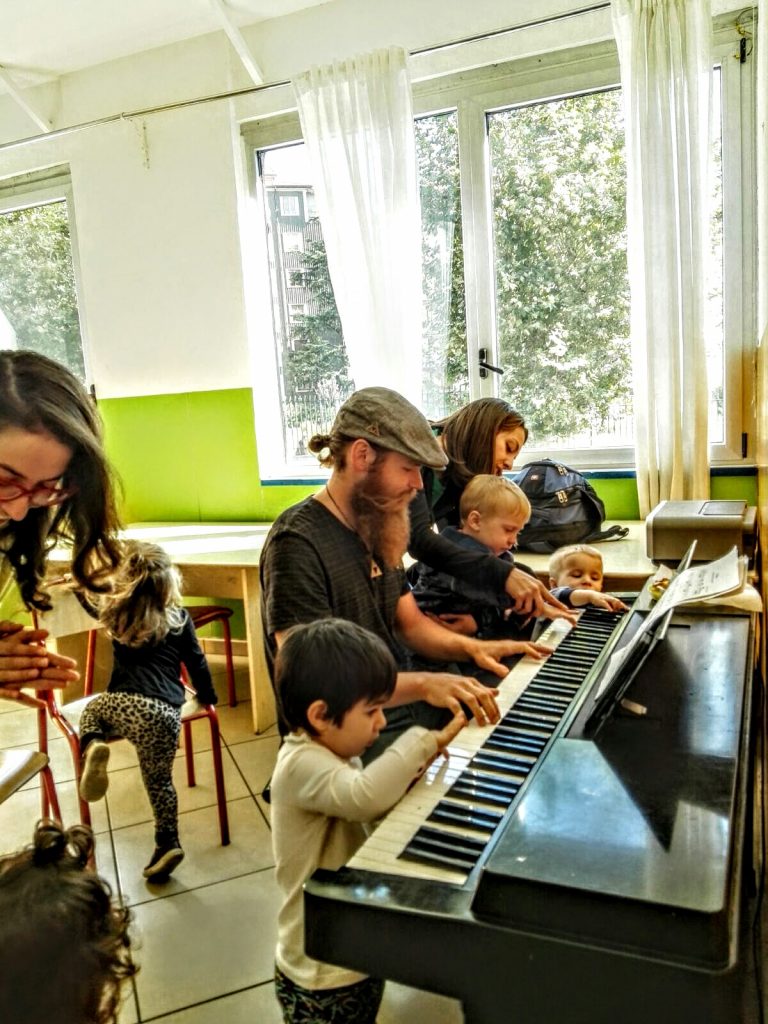 Thankfully, no video evidence exists of me teaching them the “hokey pokey”.

Lastly, were it not for the long walks and talks, company and conversation with Erica, I would have lost my sanity long before I was asked to leave. Speaking of:

Katia pulled me aside after dinner, and vented to me how frustrated she was with me. It was clear to me that from the very beginning she was finding things to be upset about, and instead of ever talking to me about them she let them build up inside her. She was upset that I smoked my E-cig. I had been open about that from the beginning, and she had showed me the one place on the property where I was allowed to smoke. She didn’t want her kids finding out that I smoked. Well, on the very first day they found me in my allotted space, and to my utter surprise, pulled out cigarettes of their own and lit up. They explained that they smoked when she wasn’t around. Katia admitted to me that she knew they smoked, but she still somehow blamed me for it, saying that she expected me to take their cigarettes away from them and chastise them. She was upset that I drank in my free time, again saying that it was a bad influence on the children. She blamed me for her cousin (who was my age) drinking too much one night. She said (and this one hurt) she was extremely disappointed with the amount of work getting done. I struggled to stay my tongue at that one. She talked in circles at length, and in the end said she thought it was “…just best if you find someplace else to stay”.

Since I was already late to meet up with some old friends for drinks, I told her I’d be gone before she woke up in the morning, and I headed out. 8 minutes later I climbed into the back of Dino’s car with a story to tell. 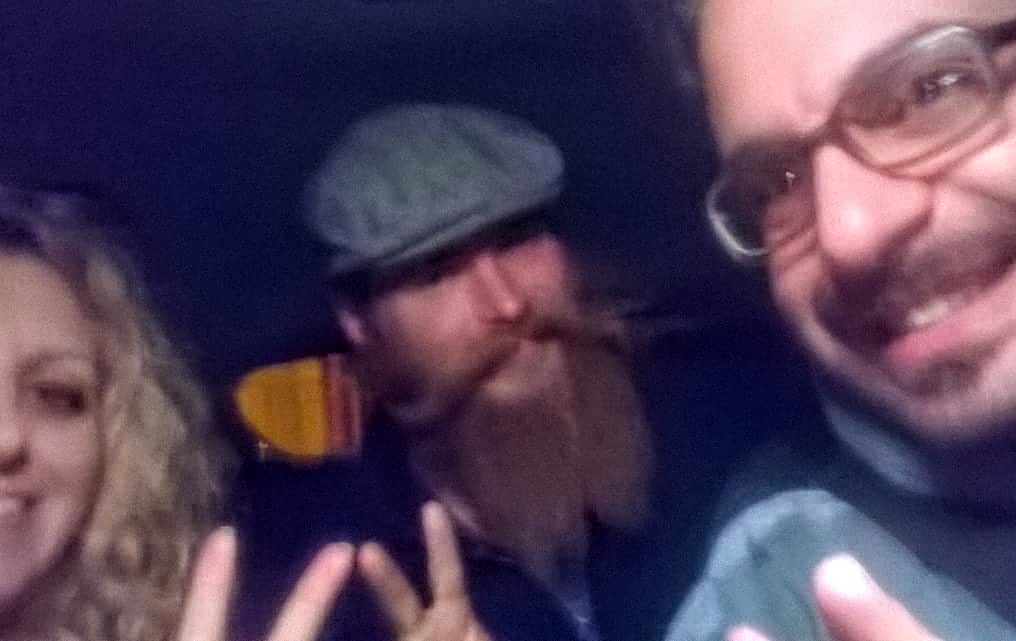 Reunited with Dino and Grazia!

Dino and Grazia had brought their new volunteer, Ruth, and were  meeting up with me in Avellino for food and drinks that very night. They had wanted to check up on me, make sure I was okay, and to introduce me to my replacement. What providence!

I tried endlessly to convince Dino and Grazia that I’d be fine moving to a hotel, hostel, or B&B for a week or two, but they insisted beyond reason that I come home with them! So…

Next time on Exploring Alexander: Dino and Family part 4?!