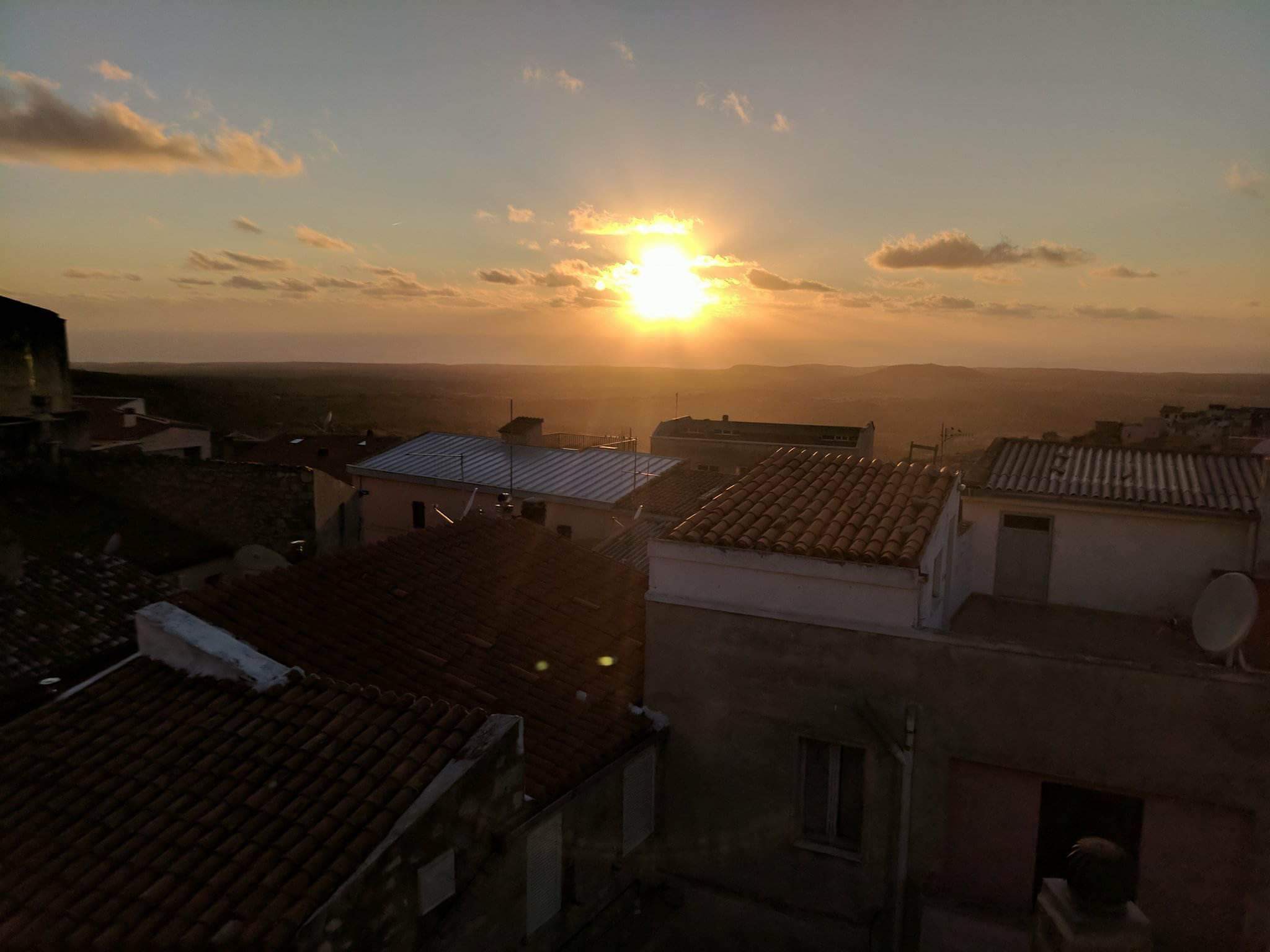 My First Night in Cuglieri, and The Miracle of Google Translate!

“When we last left our hero…”

The train sped swiftly across the island of Sardinia, bearing me from its capital, the beautiful city of Cagliari on the south coast, to Oristano, a city on the west coast about an hour and a half away. For those not familiar with the island of Sardinia, It’s no small matter. Measuring about 100 miles by 75 miles, and boasting more than 1,100 miles of coastline, Sardinia is the second largest island in the Mediterranean Sea. There’s your geography lesson for the day.

About 30 minutes into my train ride, I received a message from my Workaway host, Paola, informing me that due to a sudden medical issue she was experiencing, she would be unable to pick me up at the train station in Oristano and bring me to Cugliari. However, before I could bat an eye, she also provided me with details on how to get from the train station to the bus station, and what times throughout the day I could catch a bus from Oristano to Cuglieri. 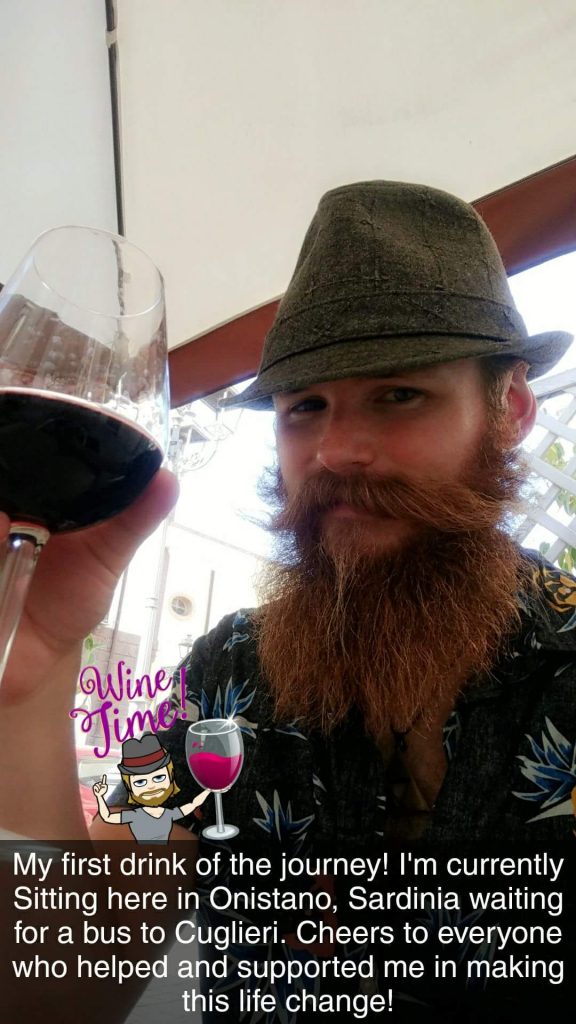 My first drink as an expat!

What seemed like a misfortune quickly proved to be otherwise. Having just missed the first bus, I found myself with a few hours to explore a new city, and more importantly, time to enjoy the first drink (or 2) of my journey! A glass of wine at a cafe or bar here costs €1,00. That’s $1.19 for a glass of wine! Oh, and the city of Oristano was pretty and stuff….

Moving on, with the help of google translate and a kind stranger, I ended up on the right bus! (Really, I almost didn’t!)

When I arrived in Cuglieri, Paola picked me up at the bus station and brought me to her B&B where I would be staying for nearly a month.. She showed me around the (Seriously fancy) place, and left me to enjoy the rest of my day. Before she left, she told me about a little town party going on later that evening. She had me at pizza, wine, and music. Before we go there, here’s the view from the balconies. 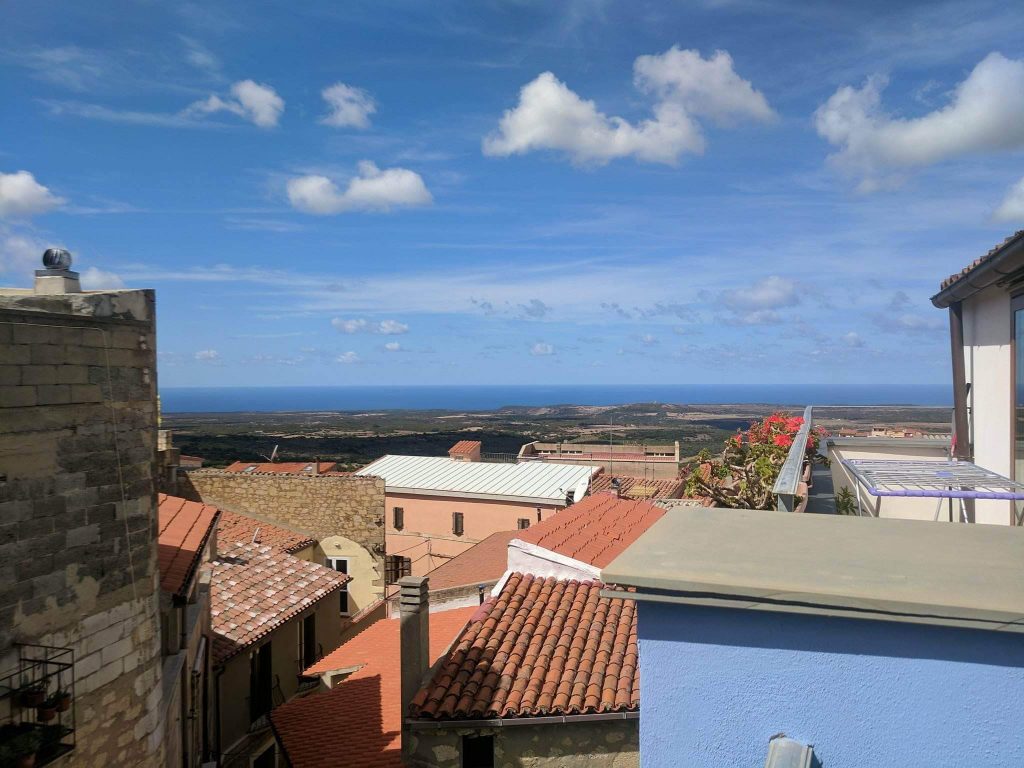 View from the front balcony. 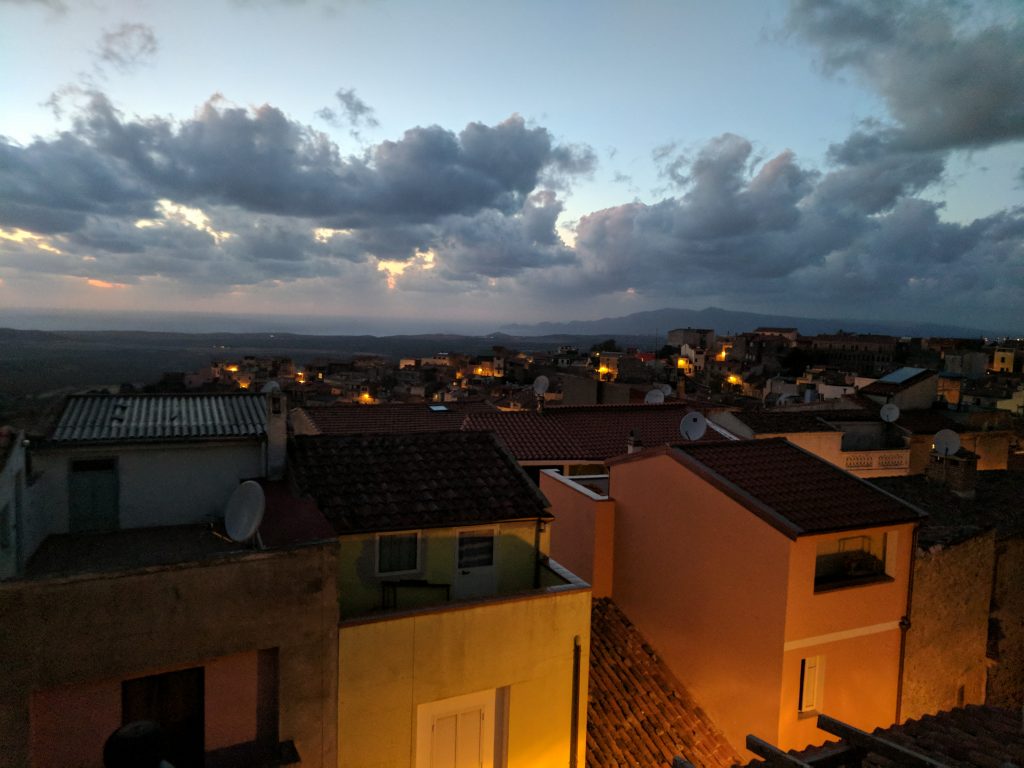 View from the side balcony.

If you’re interested in seeing more pictures of the B&B, check out Paola’s airbnb page here.

The party was a truly amazing experience! Outdoors, live music, great pizza, delicious wine, and lots ,and lots, and lots of people who don’t speak English! I know just enough Italian to order a pizza and wine. So for the most part, I just wandered around and people watched. 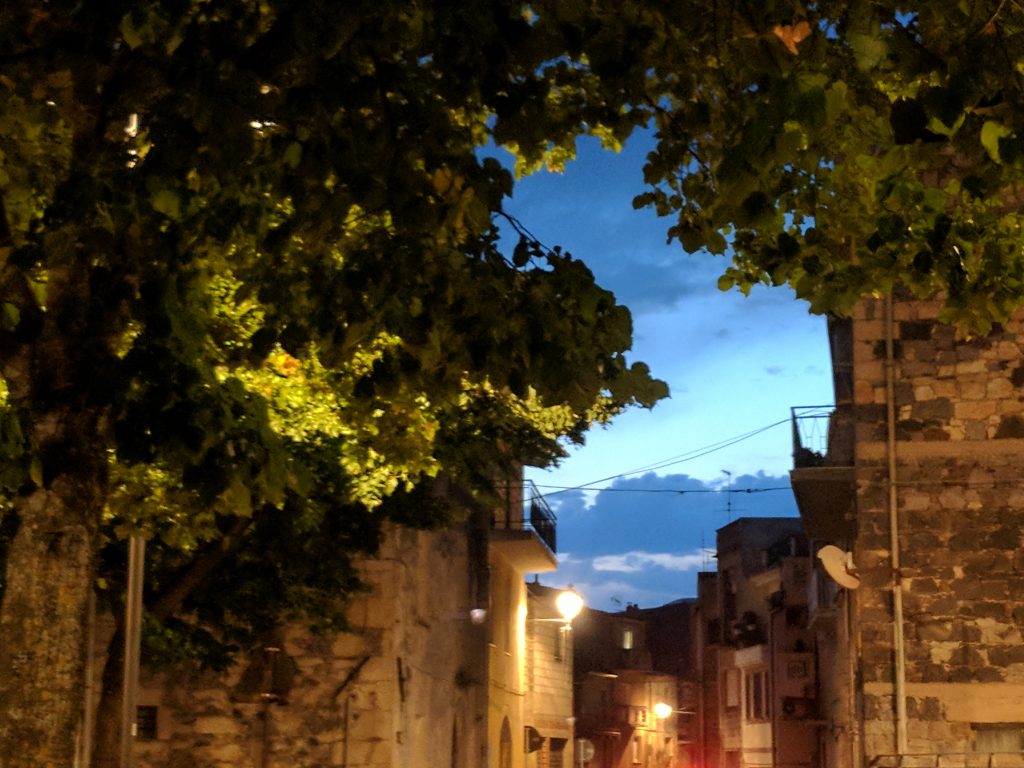 When my pizza was ready, the man refused to hand it to me. Instead, he brought me over to a table of Italians, and sat me down with them before placing the tantalizing pizza in front of me.

Boom! Questions! Questions from every which way, people were immediately engaged with me. I knew enough to understand some of their questions, but not how to answer any of them. I quickly (in Italian) apologized and informed them that I do not speak Italian, only English.

That wasn’t good enough for them. Have you ever seen an English speaker trying to talk to someone else who doesn’t speak English, and the English speaker thinks that if they just talk slower, the other person will suddenly understand? That’s exactly what they were doing. They wouldn’t stop. Finally I caved and whipped out Google Translate.

I used it to answer the questions that I could understand, but didn’t know how to answer. That just poured gas on the flame. They were all over it! I quickly demonstrated how to switch between English and Italian, and we talked for hours! These people couldn’t get enough of me, and now that I was engaged with them, others became emboldened to come up and ask questions, or buy me drinks, Many people came up just to take a picture with me. Others, less brave, sniped them through bushes.. 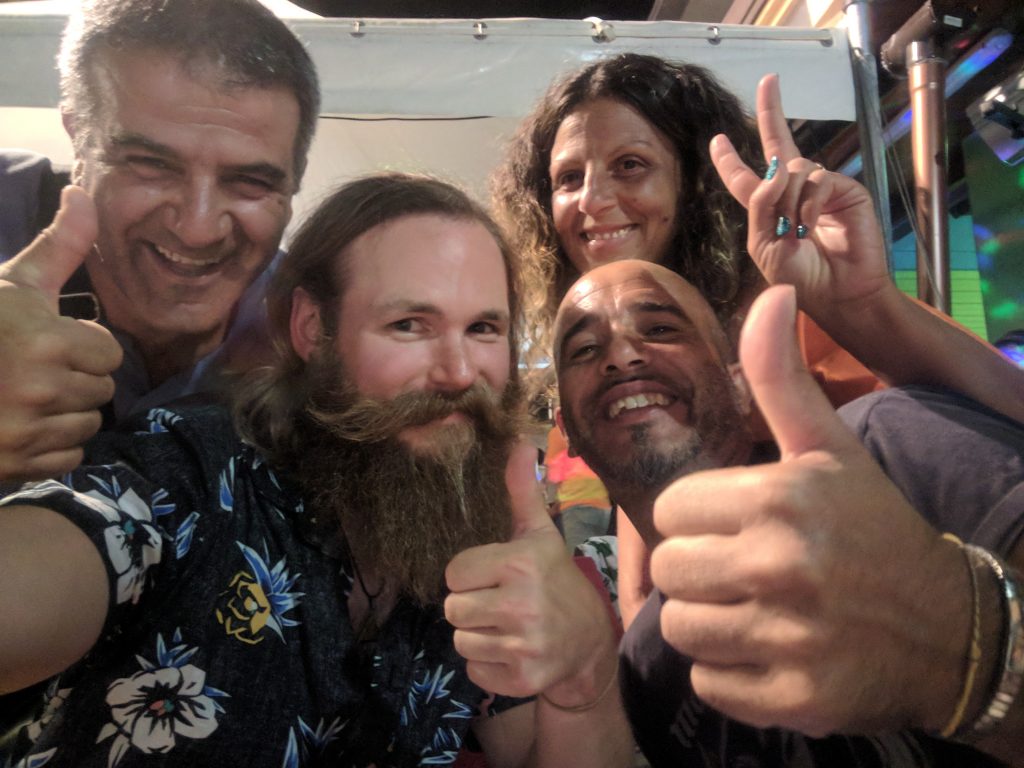 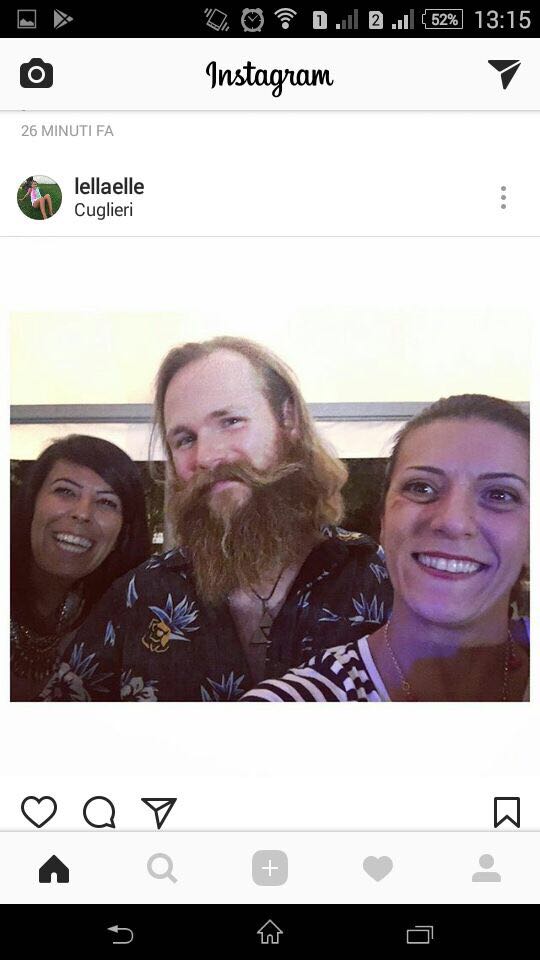 Paola had this one sent to her phone from her friend who’s the father of one of the boys who worked at the event.

I felt like a celebrity. From the moment that I sat down at that table, my wine glass was never empty, and I didn’t pay for a single one!

In fact, every time I tried to leave someone would buy me another drink!

It’s truly amazing how something as simple as Google Translate can open bridges of communication between people who would have never been able to connect.

My night was completely transformed. I went from being an outsider, a spectator of the evening, to being completely, and eagerly welcomed by a mass of people I’d never have had the chance to meet. The people here are proving time and again to be the friendliest, and most welcoming people I’ve ever met!

Thank you Sardinia, for helping a lonely traveler feel a little less lonely. 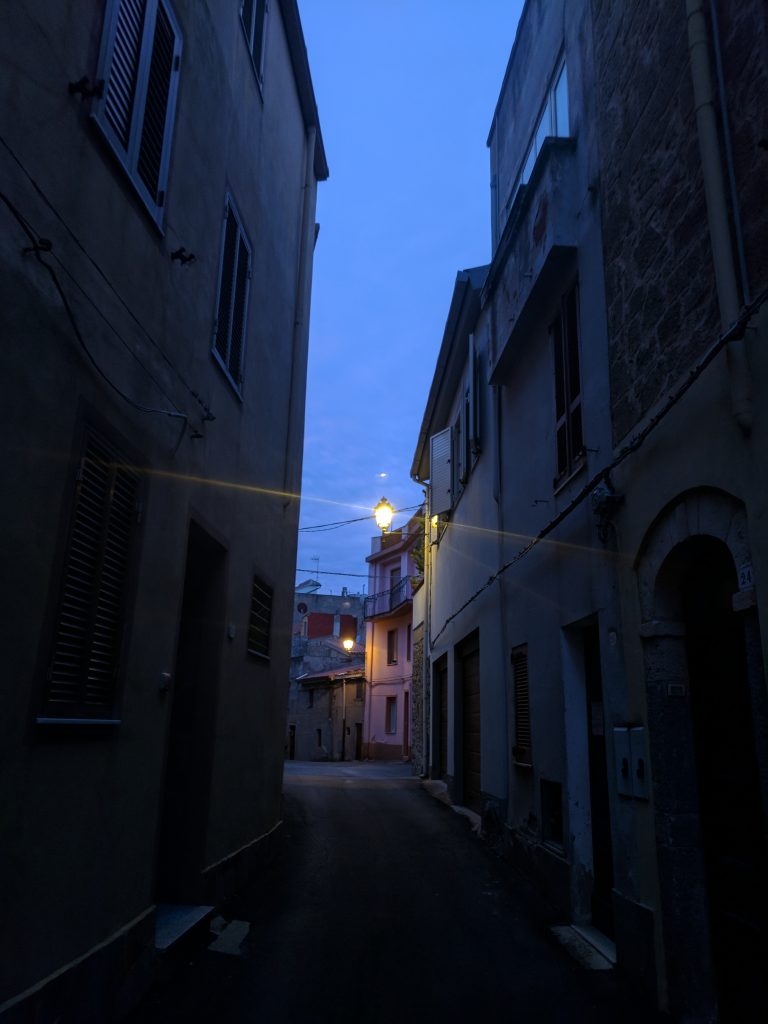 6 Comments on “My First Night in Cuglieri, and The Miracle of Google Translate!”