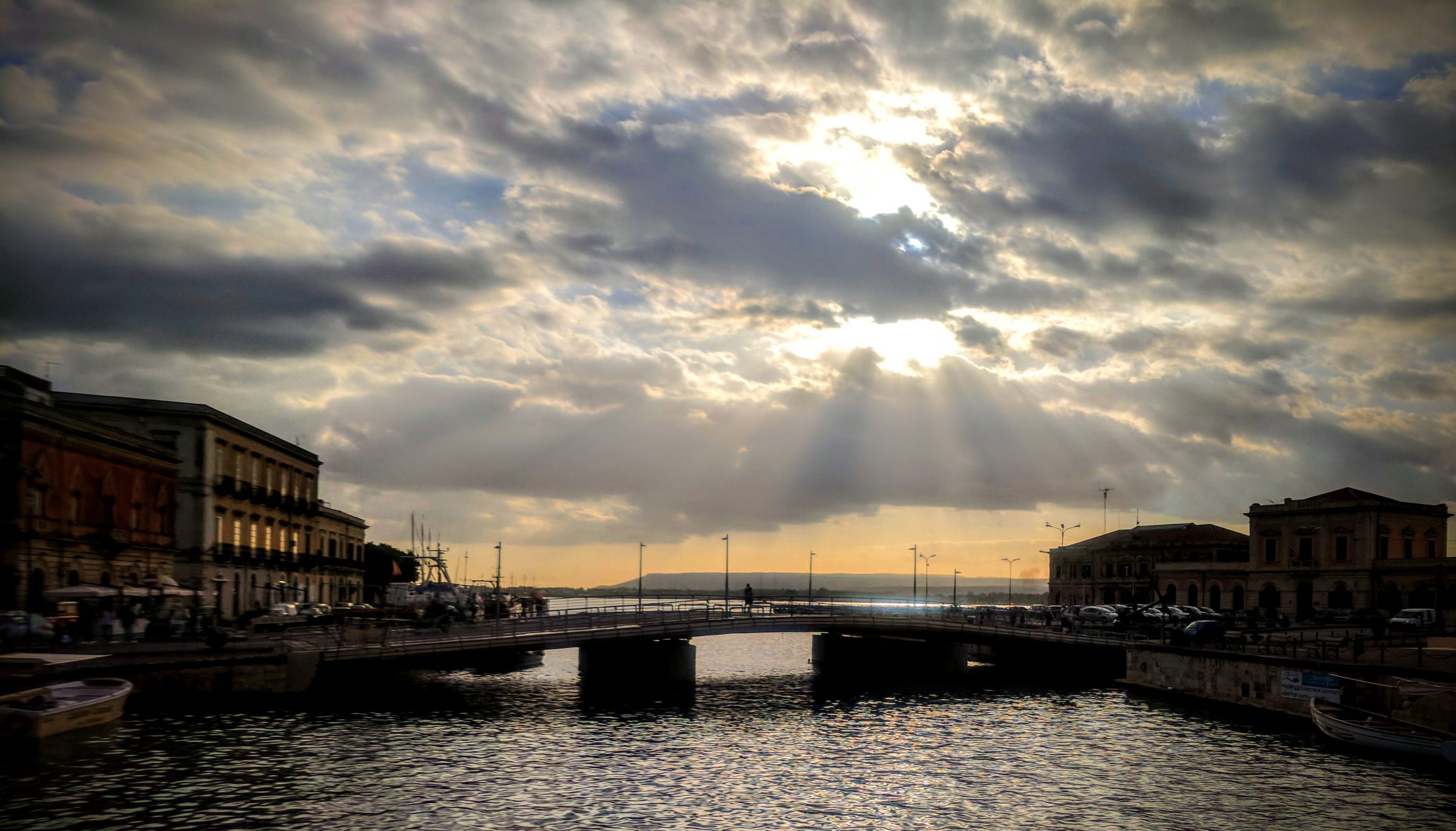 Dino drove me to Naples, had one last coffee with me, and walked me to the train station. We said our farewells, and I boarded the midnight train to Syracuse. Now, the geographically inclined might notice that in addition to a lot of land, there’s a sea between those two cities. So how is it that I took a train from Italy to Sicily? The answer is simple:My train got on a boat, crossed the Mediterranean Sea, got off the boat, and continued on its merry way. Questions? Yeah, me too. 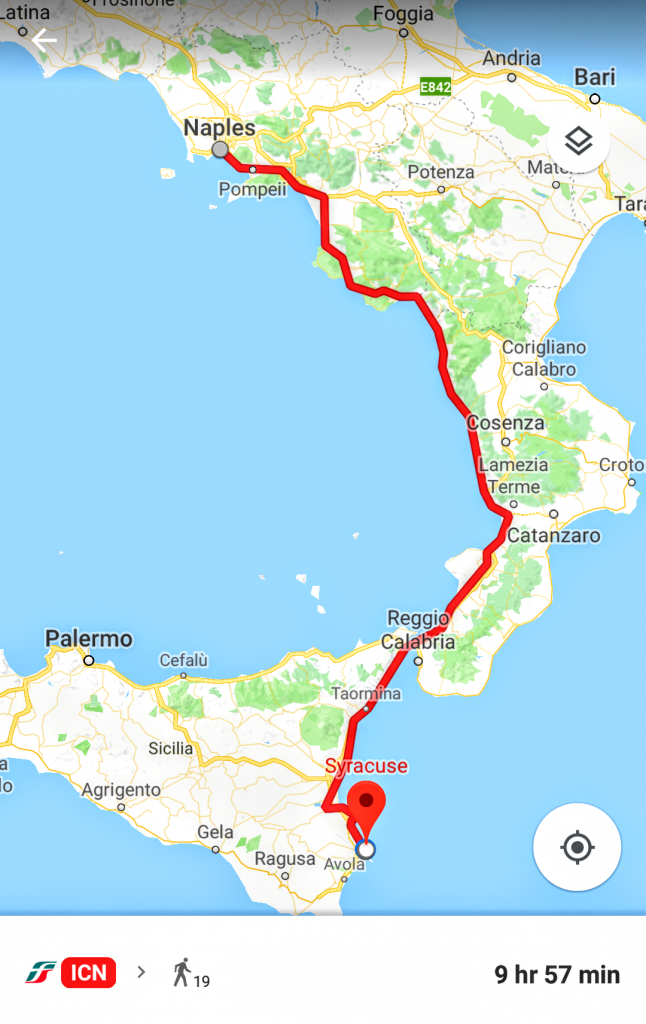 Midnight train from Naples to Syracuse.

Before bed, I chatted with my cabin mates for a bit, had a portion of the Italian travel food that Grazia had graciously cooked and packed me (I have no idea what it was, but it was delicious!), and helped myself to a bit of the wine she’d included (Seriously, they sent me off with wine for the road! I love that family!). It took me a long while to fall asleep, and I woke often, but I did sleep. I remember waking in the middle of the night, checking Google Maps, and finding myself in the the Mediterranean Sea. Since I hadn’t moved from my bunk on the train, it was a little strange.

I awoke from a restless sleep early in the morning. After brushing my teeth and gathering my belongings, I watched in wonder as the beautiful Sicilian countryside slipped by. My train arrived in Syracuse around 8 or 9 in the morning, and I was free to wander the ancient city until my evening train to Ispica.

Honestly, these types of days are so special to me. I call them my “in-between days”, which is a painfully mundane name for how magical and exciting they are. There’s just this overwhelming sense of freedom and wonder, excitement and anxiety.

It’s not that you don’t feel free when you’re volunteering and staying with your host. It’s just that you also have this feeling of being under your host’s wing. They will guide you, help you, advise you, show you around, etc. On your in-between days, you’re truly a stranger in a strange land. You are free to walk, roam, and explore anything you want, but you do so blindly. If you get lost, or miss your transport, you’re on your own.

It just happens so quickly. Suddenly you’re in the middle of a big city you’ve heard mention of your whole life, or a small town you’ve never heard of. You’re a blaten tourist in a touristy area, or some passerby passing through a place few even know exist. Either way, everywhere you look is the unknown, and you’re only job is to explore.

Moving forward, with no guide or direction, I shouldered my pack, picked up my grandfather’s walking stick, and walked away from the train station. Eventually I glanced at Google Maps to see what points of interest were in the area, and headed toward the Teatro Greco. It seemed like a logical choice with my love of all things ancient. 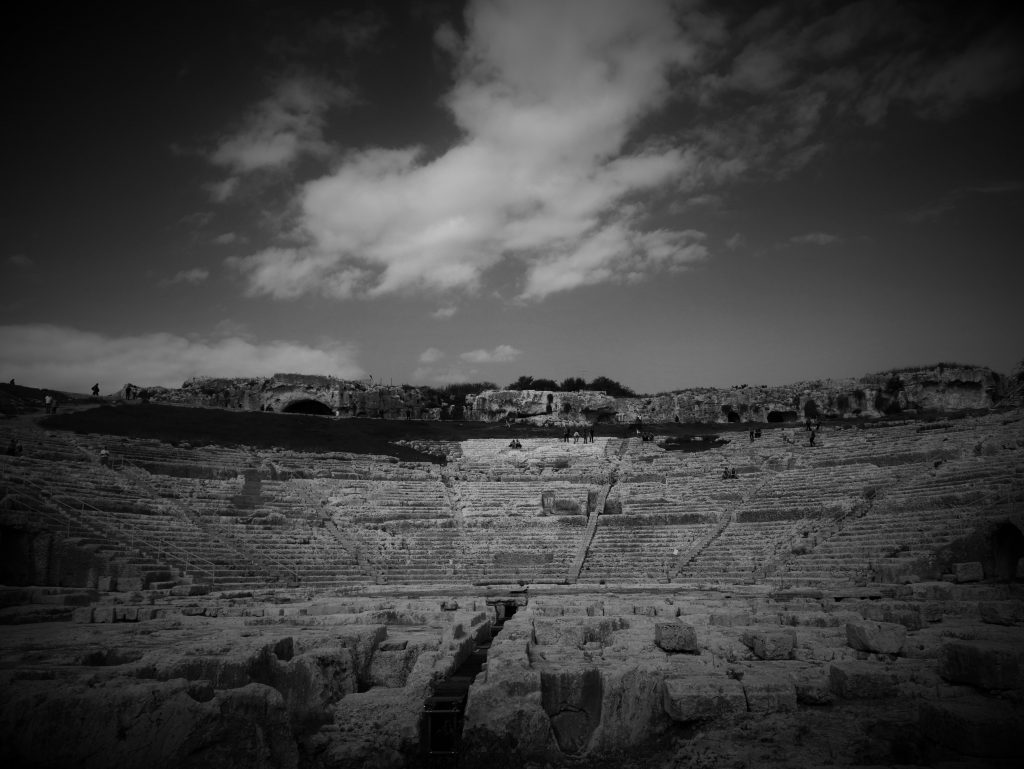 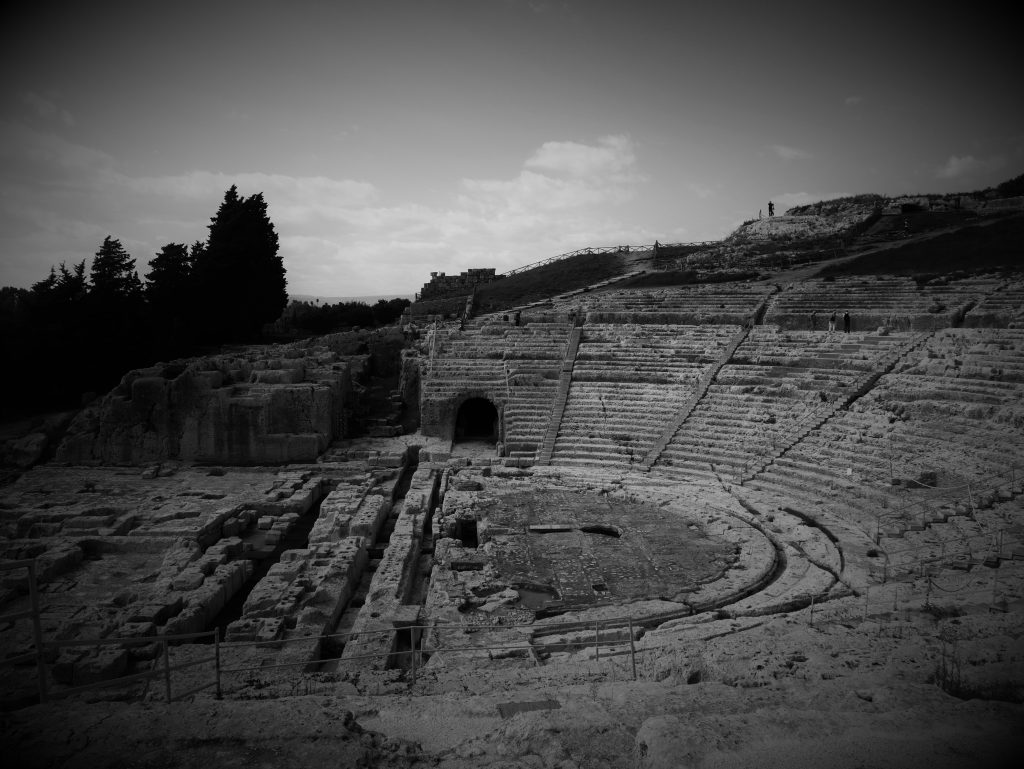 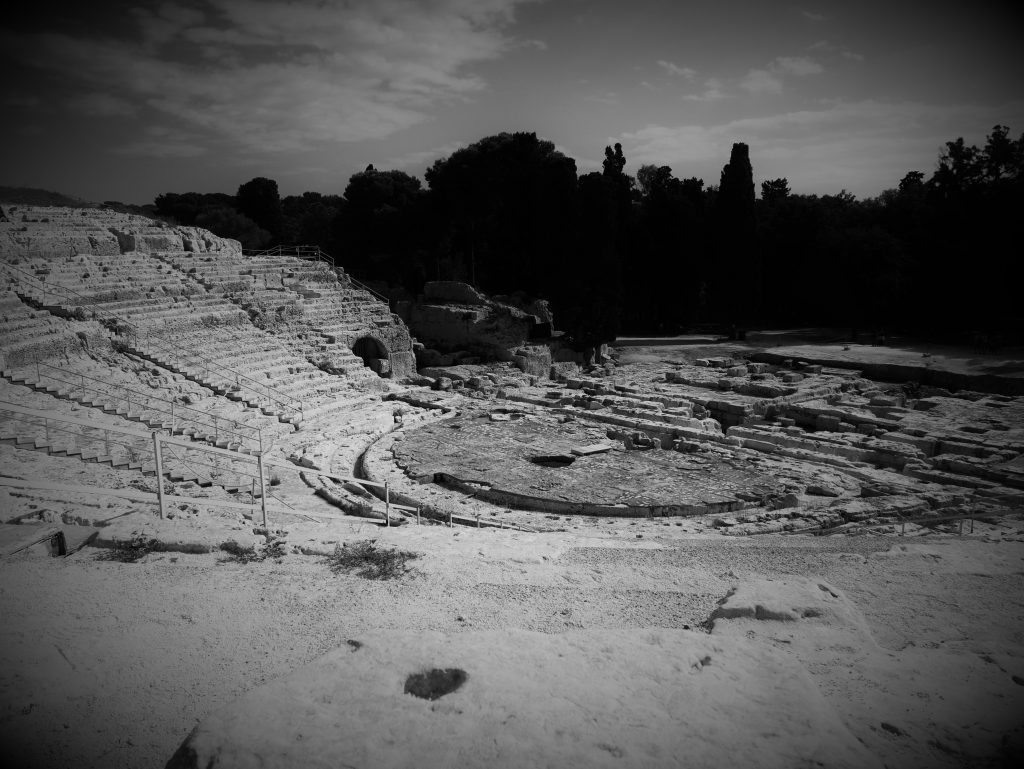 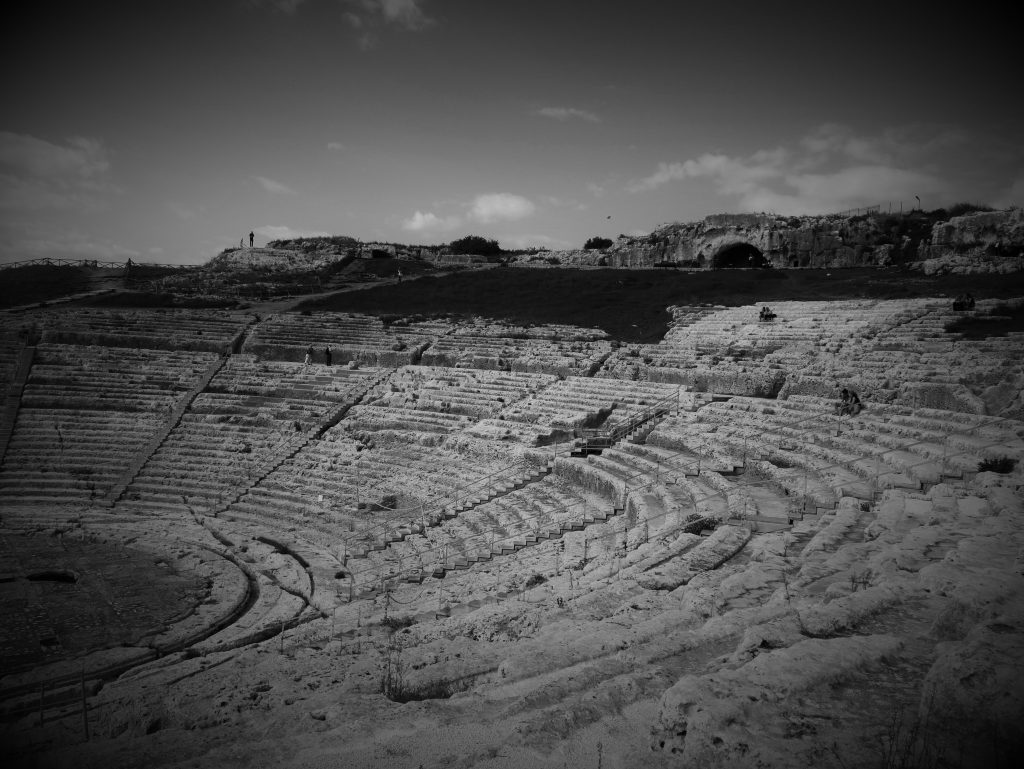 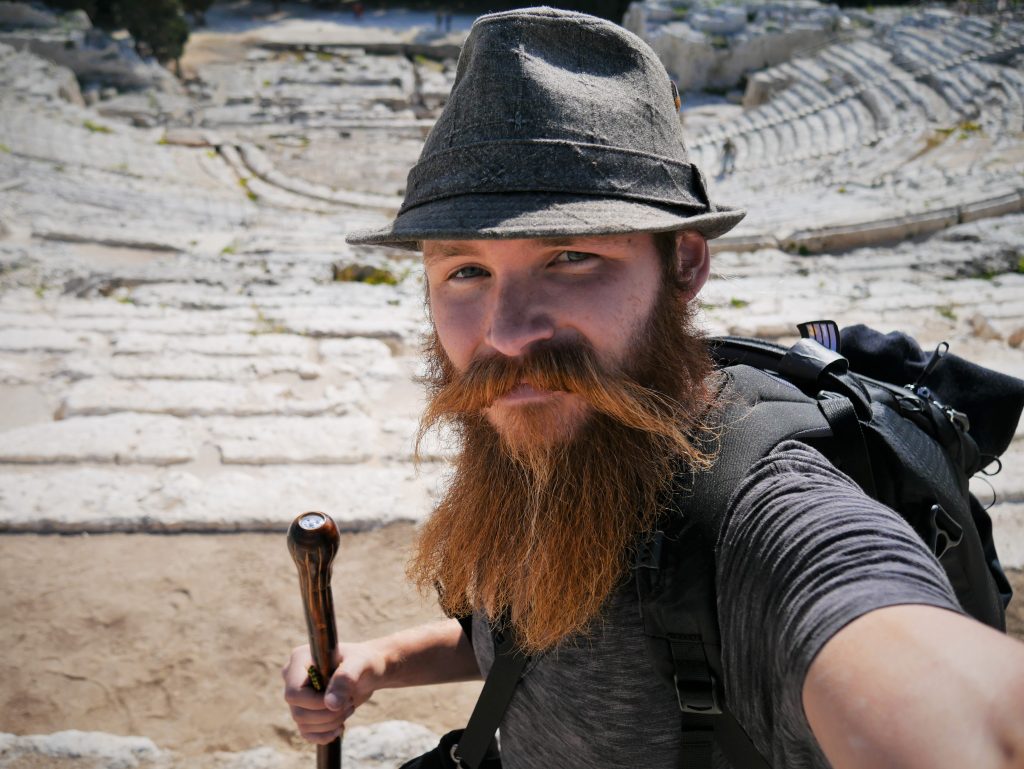 Just me, my grandpa’s walking stick, and an ancient Greek theatre. 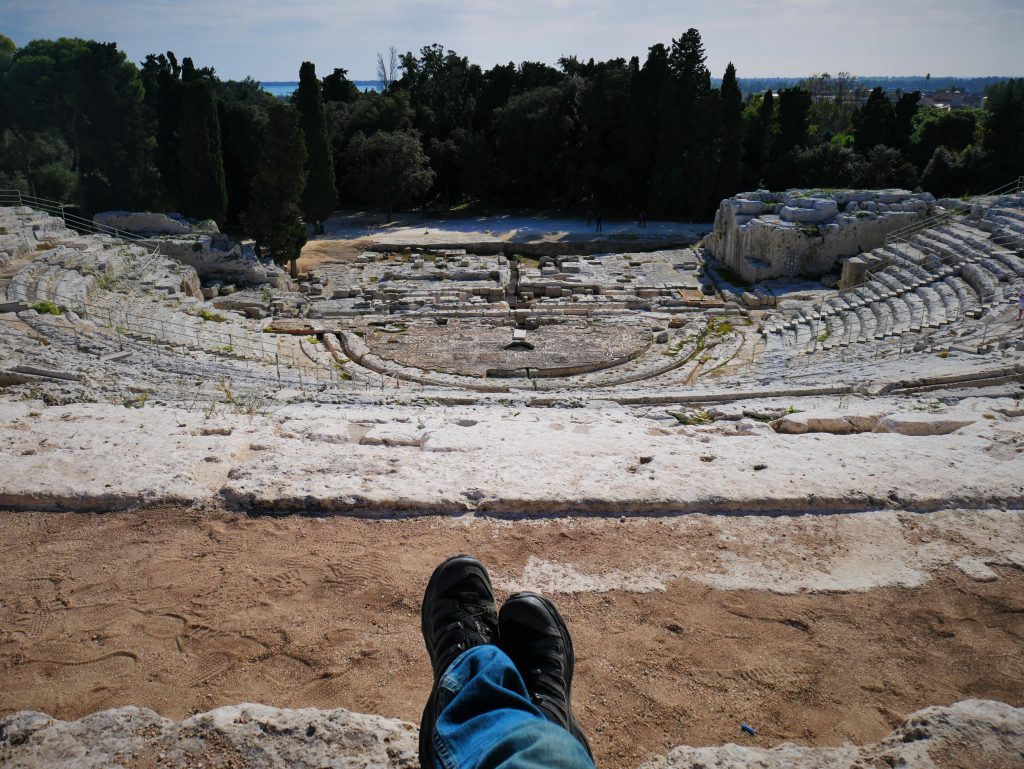 I think I’m a little late for the show. I wondered while I sat here when the last time a show was put on this stage.

Along the way I stumbled into the Ear of Dionysius, a cave famous for having unbelievable acoustics causing even the smallest sounds to resonate drastically throughout the cave. Legend has it that the “…tyrant Dionysius I of Syracuse used the cave as a prison  for political dissidents, and by means of the perfect acoustics eavesdropped on the plans and secrets of his captives.” -Per Wiki.

There’s more to the story, but it gets a bit dark after that. 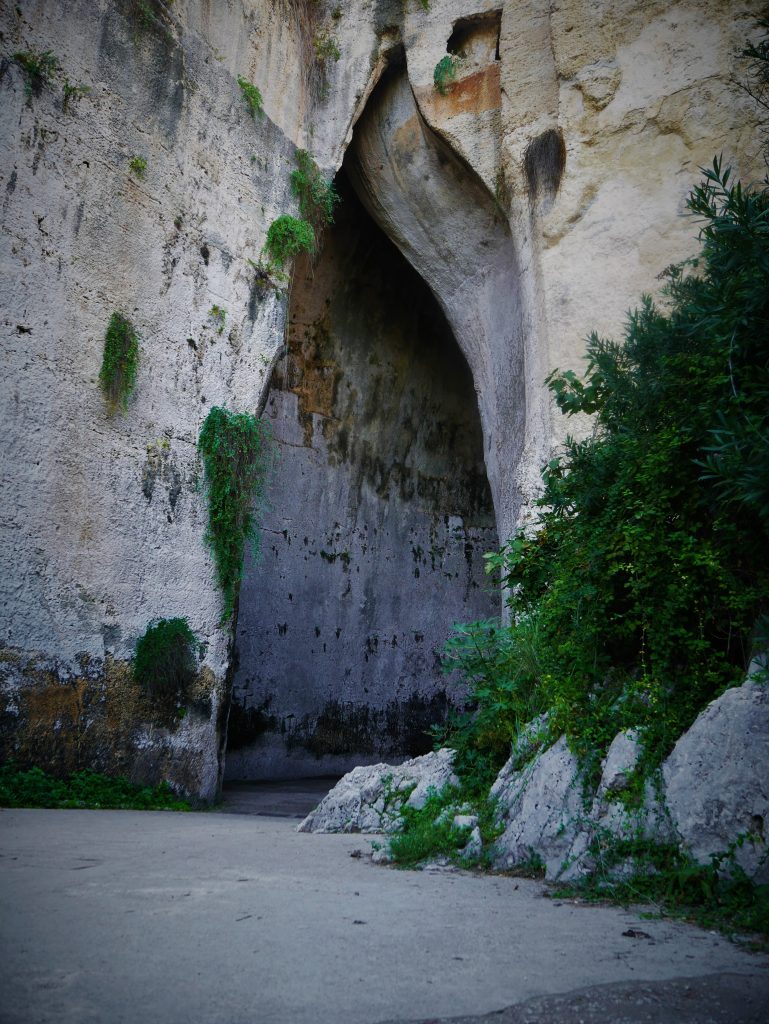 The Ear of Dionysius. 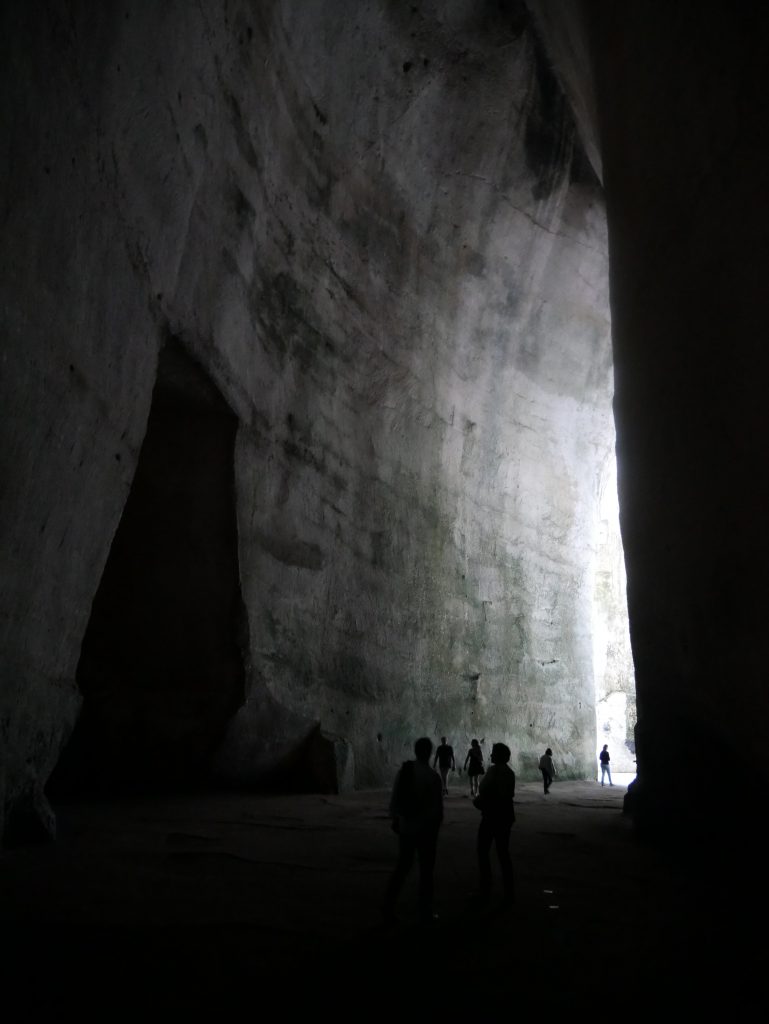 Inside the Ear of Dionysius.

Remind me sometime to tell you the story of how I became the ‘The Ghost of Dionysius’ Cave. 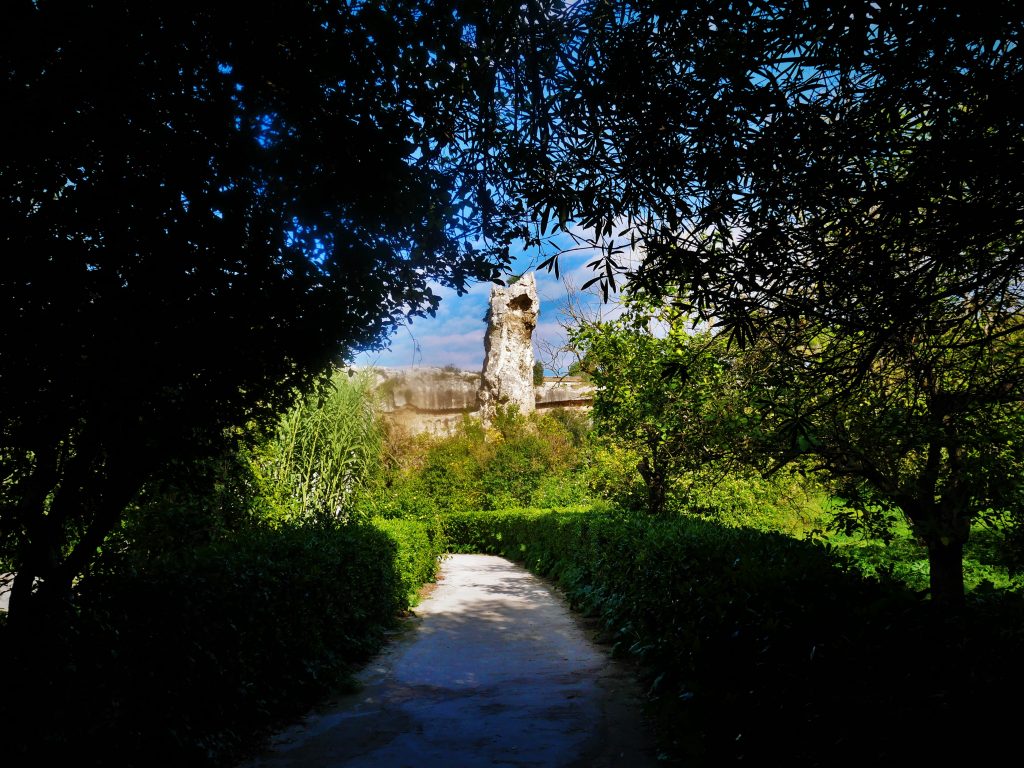 Another cool thing I saw during my walk. Never found out what it was.

Later I walked through a bit of the ‘old city’ and enjoyed a glass of wine beside the Temple of Apollo. 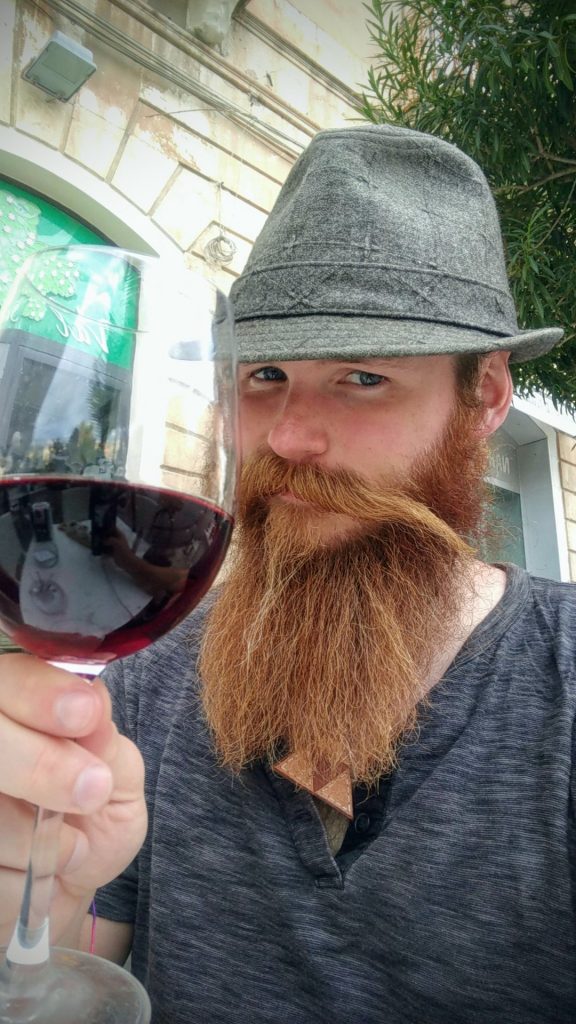 Wine after a LOT of walking! 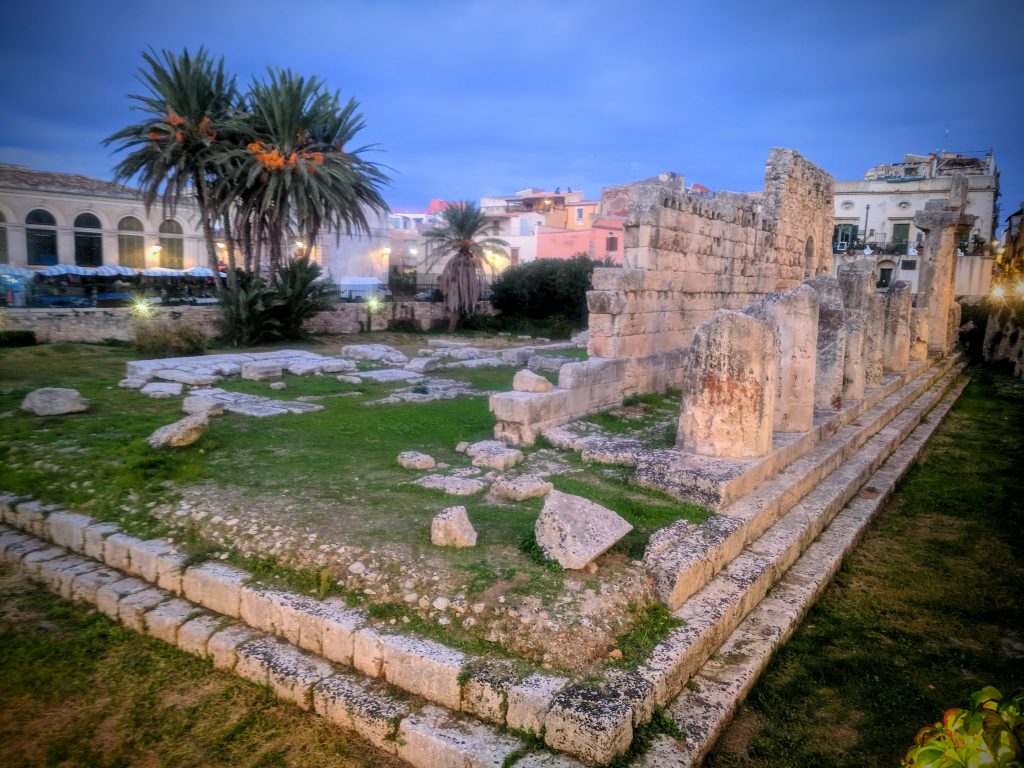 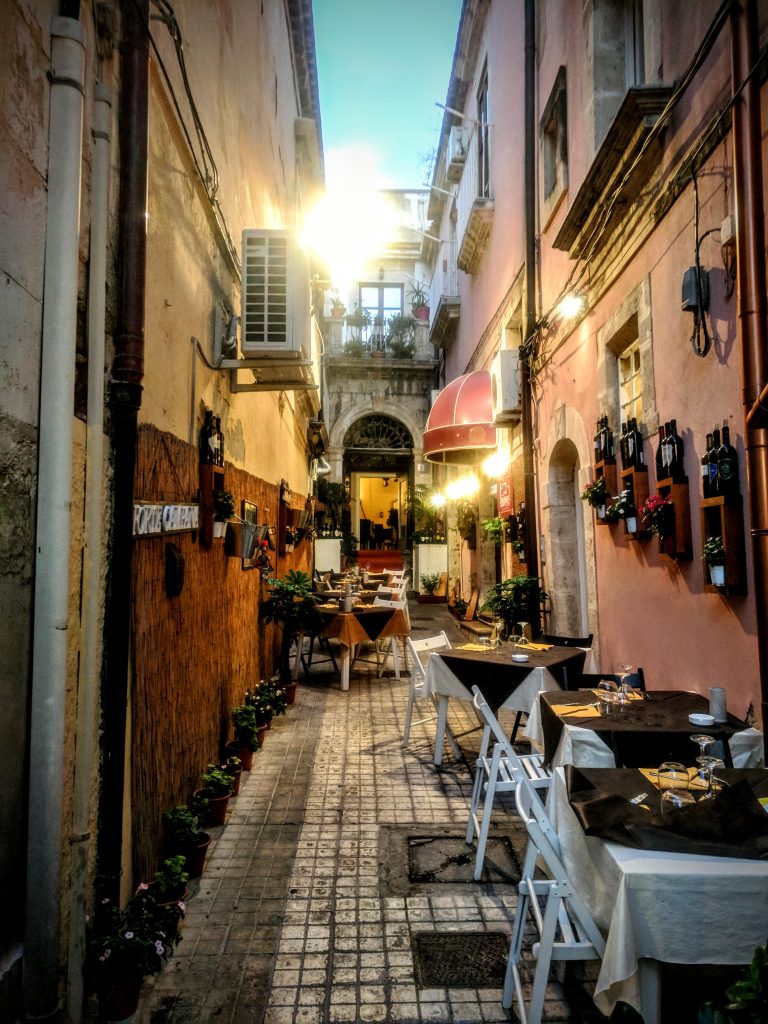 Just an adorable alley I found.

On the way back to the train station, I walked past this little bar that had a piano in it. I walked in and ordered “Un bicchiere di vino rosso, per favore.” (my one solid phrase in Italian). I had barely sipped the wine before the bartender asked me a question in Italian. I apologized and explained I only speak English. He thought it over and translated: “Do you play piano?”

Smiling, I brought my glass over to the piano, and started playing while I drank. Between songs, the bartender would come over and we’d chat about life, love, and the pursuit of something or another. When my glass was near empty, another was set down beside it. “Compliments of the gentleman who just left” the bartender explained. I don’t recall how long I played, or how many more “compliments” I received, but next thing I knew I was running late for my train! 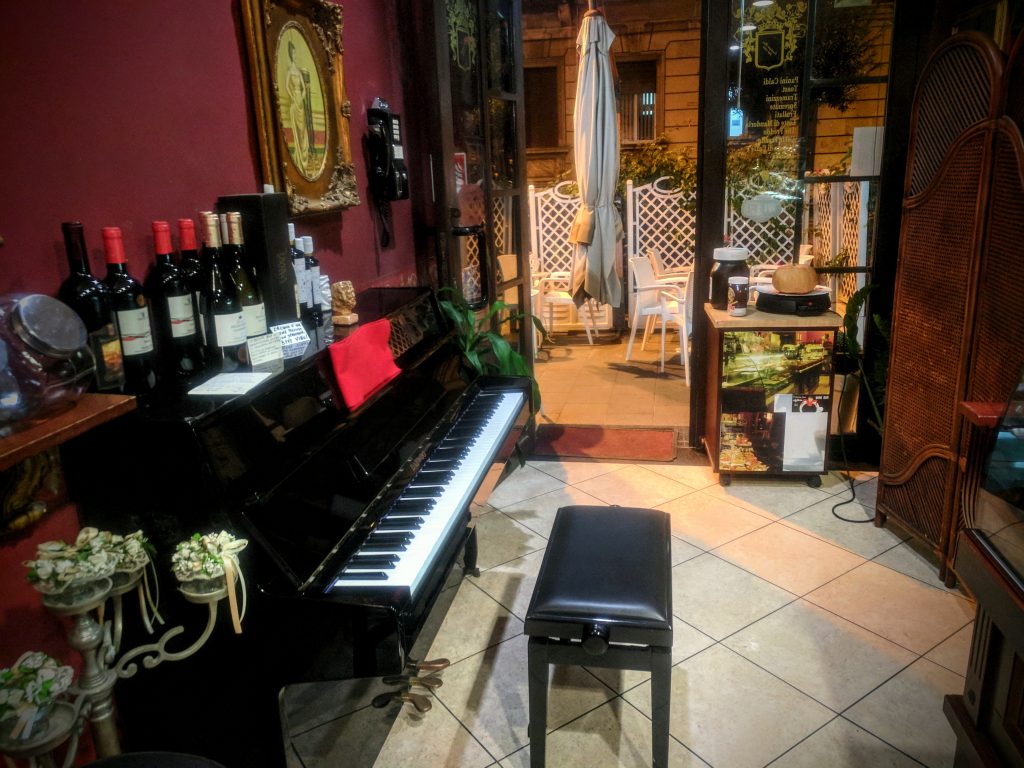 With that I smiled and ran out the door. I made it to the station with 10 minutes to spare! After 10 minutes, just as my train (which was nowhere in sight) was scheduled to leave, a man began shouting at me from across the platform. I didn’t understand and shouted back that I only spoke English. He shouted “WHERE GO?”

I shouted back, “ISPICA!” to which he began frantically waving me at me and pointing in at the far end of the platform. I ran as quickly as I across the platform, down the stairs, underneath the tracks, up the stairs on the other side, and around the building. I made it just in time to watch my train disappear into the night.

Remember earlier when I talked about being a stranger in a strange land and getting lost or missing your transportation? Well, there I was: On my own for a night in Syracuse.

← Adventures with Dino and Family – Part 4 – A Bench, a Triforce, and a Final Farewell!
Sicily, Egypt, and an Unexpected Return →