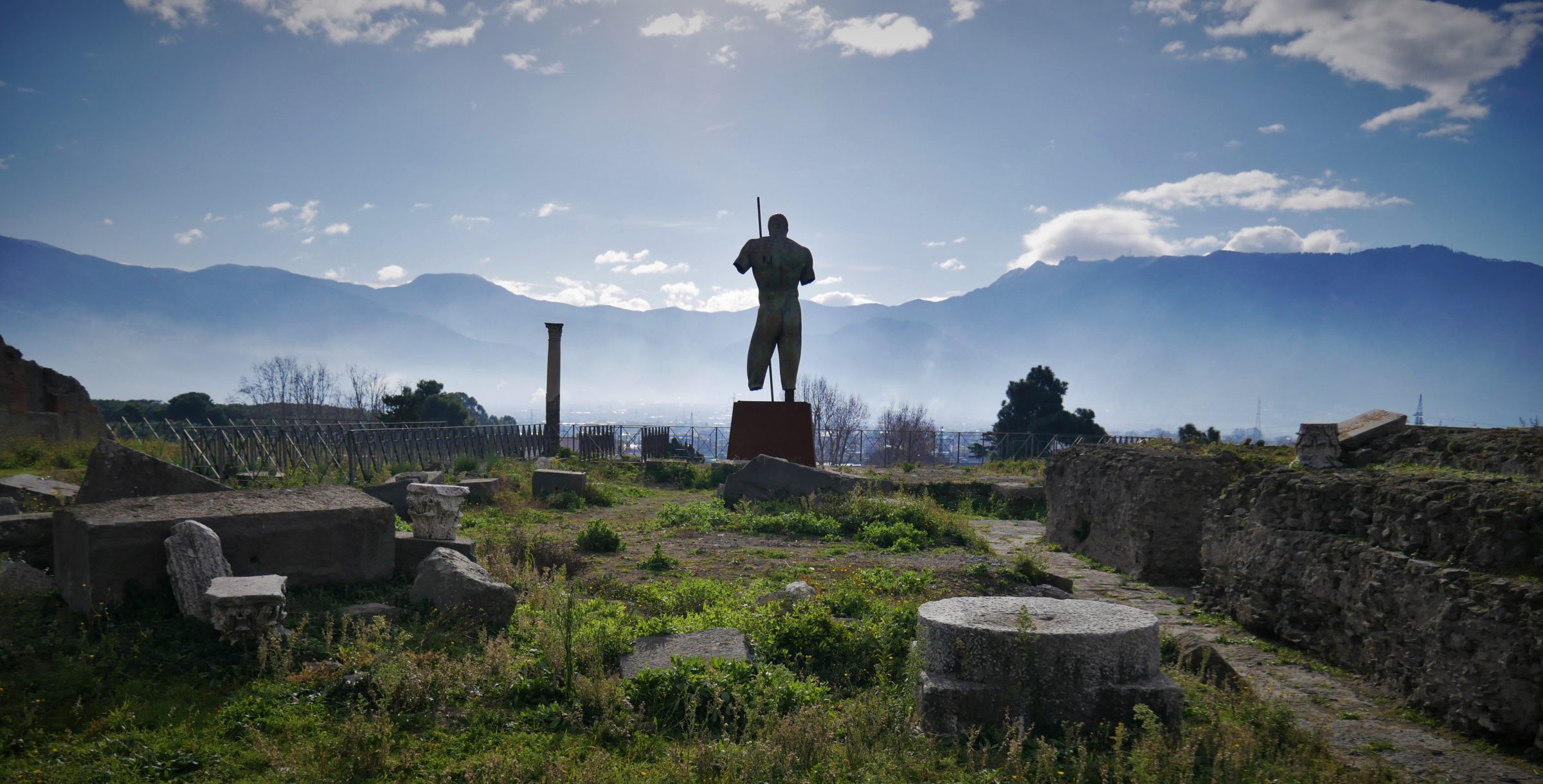 Adventures With Dino And Family -Part 8 – The Lost City of Pompeii!

Next up was a trip to Pompeii! While Aubre had studied much about Pompeii in school and had always wanted to visit the ancient city, I had merely harboured my own small fascination with the city since reading a children’s book about it long ago. Despite what we thought we knew about Pompeii, neither one of us quite knew what to expect!

A Page in History

Pompeii had quite an extensive and complicated history long before its famed destruction, or even its Roman rule. So to catch us up to speed real quick, I’ve compiled a very brief summary:

On the 5th of February 62 CE (17 years before Vesuvius would bury the city), Pompeii was struck by a major earthquake that dealt severe damage throughout the city. Temples, houses, bridges, and roads were destroyed. Chaos followed, and fires (caused by oil lamps that had fallen during the quake) added to the panic. Anarchy ruled the city over the days that followed, as theft and starvation plagued the survivors. While many of Pompeii’s inhabitants stayed to rebuild the city, a considerable amount moved to other cities within the Roman empire. A move that unbeknownst to them, would save their lives.

17 years later, on what is now believed to have been an autumn day in late October of 79 CE, Vesuvius erupted. It is estimated that the population of Pompeii at the time was between 6,000 and 20,000, and that around 2,000 people lost their lives in the tragic event. Pompeii was completely buried in 25 meters of ash and dust, and lost to human knowledge for over a thousand years.

Aubre and I arrived in modern Pompeii by train bright and early in the morning! We made the 15 minute walk to the entrance of this famous archeological site, bought our tickets, and entered the ancient city of Pompeii.

The first thing I noticed, was a strange feeling of not having to look anywhere. Normally when I enter an archeological site, the first thing I do is to start looking for the ruins.

Pompeii was different. It was opposite. Instead of looking around, spotting scattered stone foundations and imagining myself walking through an ancient city, I was surrounded by ancient buildings and homes. I couldn’t not see them. I wasn’t imaginiting an ancient city, I was in one. I was on the streets of Pompeii.

I normally wouldn’t post such a bad picture, but this was my literal first sight upon entering Pompeii.

This wasn’t a grassy plain, speckled with the remnants of crumbling foundations and the occasional fallen column; this was an entire city with homes and bars, streets and sidewalks, theaters and statues. This was Pompeii, home to thousands of humans one moment, and their tomb the next. Pompeii was ghost town, beautiful and tragic.

With no real Itinerary we looked at the map and headed off in the direction of the amphitheatre, exploring the sites along the way.

Pompeii is like no other archeological site I’ve ever experienced. I know I said that in the beginning of this post, but I want to expand on that thought. You see, it was much more than a thought. It was a deeply resonating emotion.

When I stood within the ancient Greek temples of Paestum, strolled through the scattered remains of the Phoenician port city of Tharros, and explored the ruins of Velia, I was in awe.

I couldn’t believe I was touching stone shaped and set by human hands 2,000+ years ago. I stood within a towering, monumental temple and marveled at how incredible it was that this massive human achievement has stood the test of time. It was a positively grounding and inspiring feeling.

But Pompeii was not the same. It didn’t stand the test of time; it was victim to a catastrophic and tragic event that happened to preserve it.

In Pompeii you’re not just walking through an ancient house, you’re walking through the home of another human being who went from living a normal life one moment, to fleeing for their life the next. As the world churned beneath their feet and the sun was extinguished from the sky by a blackness darker than night, they fled their home never imagining that 2,000 years later your touristy butt would be snapping photographs of their living room, bedroom, or kitchen.

Pompeii is amazing, don’t get me wrong. It’s still incredible, and I still marvelled, but it was a different kind of marvel. It was a solemn marvel. I marvelled at the significant insight into ancient Roman life that Pompeii provides, but the somber truth of why I was able to get this gleam into ancient human history hung heavily about my step. It walked the streets of Pompeii with me, it whispered softly on the breeze, and loomed over the ancient city in the form of a sleeping giant.


Vesuvius sleeps for now, but this ghost town stands testament to its destructive capabilities. Two million people now live in its immediate vicinity. Will we be more prepared for Vesuvius’s next eruption? Or will history repeat itself?